PFCLObfuscate has its own Graphical User Interface (GUI) and all of the obfuscators features and configurations can be controlled from this interface. All of the PL/SQL source code for a schema can be downloaded and viewed and then chosen for obfuscation or not. The GUI allows full control and viewing of original source code and also obfuscated source code.

Here is an example of some of the PFCLObfuscate configuration: 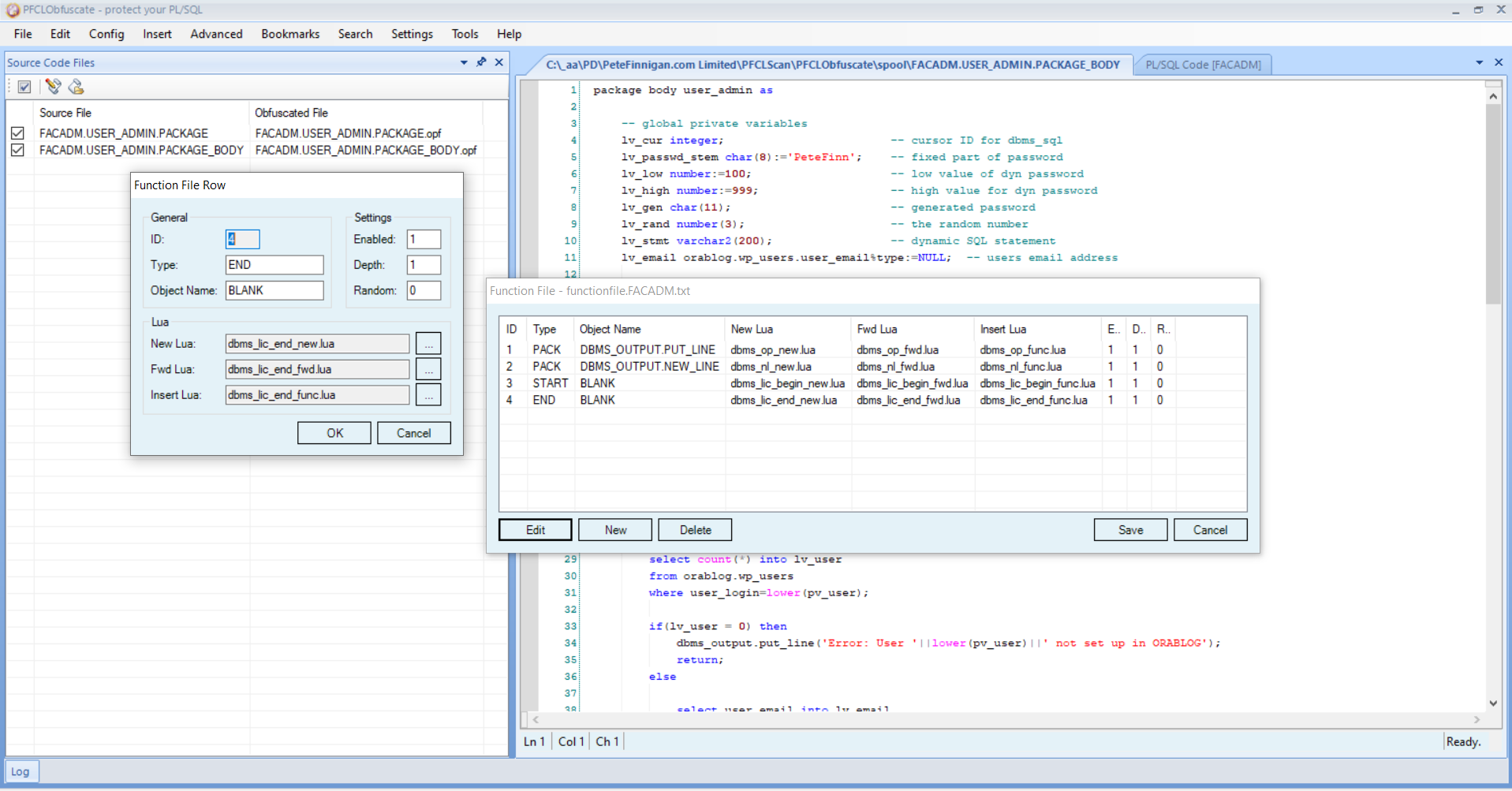 PFCLObfuscate was designed as a command line tool originally to allow it to be easily integrated into any existing build processes or scripts or indeed to be added as a user tool / plugin to existing GUI Database Development tools. PFCLObfuscate comes with simple command line tools that allow a complete set of source code files to be processed in one step. This command line use is still possible of course.

PFCLObfuscate is used to parse PL/SQL, SQL and SQL*Plus scripts and locate variables and function names and replace them with meaningless names that are very similar to each other to make it hard for an observer of the source code to understand the resulting obfuscated source code.

PFCLObfuscate features include the following:

How does it work: The tool is the equivalent to the front-end of a compiler. It reads SQL, SQL*Plus and PL/SQL files extracts source code tokens and obfuscates identifiers individually and also correlates the same variable names across your multiple source code files. If an API (Application Programming Interface) for instance is called TEST_PROC and it is obfuscated to a variable {random string for instance “oOiil0ll”} in the implementation and also the same {random string} variable is used in all files where the procedure TEST_PROC is used allowing correlation between source codes.

The character space used – i.e. the letters used in the variables is specified in the configuration as is the length of the variables to be generated. The PFCLObfuscate tool also compacts source code and removes comments.

PFCLObfuscate also has dynamic obfuscation to also automatically add your own code to create license type features such as limiting when your code can be run and by who and from where. You can also add tamperproof features to your code automatically to prevent it being modified by an attacker to defeat license type features. We provide a scriptable interface to PFCLObfuscate allowing PL/SQL code to easily be inserted at 6 different “hook” points within your PL/SQL. This provides a stronger string encryption and obfuscation of integers and also the ability to obfuscate standard and configurable package calls.